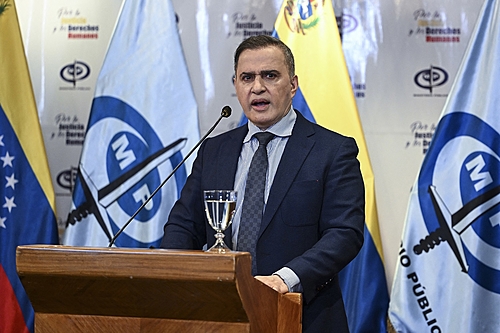 The Public Prosecutor’s Office of Venezuela asked this Monday (09) for the arrest of three former deputies for the crimes of usurpation of functions, treason to the homeland, money laundering and conspiracy.

The announcement was made by the Attorney General of the Republic, Tarek William Saab, who promised to continue with the investigations into possible crimes committed by the so-called “interim government” and by the parallel National Assembly maintained by a sector of the right-wing opposition.

According to Saab, the requests were made to the 2nd Control Court against Terrorism and also include the blocking of assets and the issuance of international red alerts, since the investigated former parliamentarians live in the US and Spain.

The MP’s action came shortly after the group of former right-wing deputies who meet in the parallel National Assembly decided to renew their supposed “term” for another year. In a meeting held on January 5 via the Zoom platform, the 104 former parliamentarians who make up this fictitious initiative put an end to Juan Guaidó’s “interim presidency” and chose a new direction for the group.

Former deputy Dinorah Figuera, from the First Justice party, was chosen “president” of the parallel AN. Former parliamentarians Marianela Fernandez (Um Novo Tempo) and Auristela Vasquez (Democratic Action) were named vice-presidents. The three were the target of arrest requests made by the MP.

In addition, two other former deputies who were named “secretary” and “sub-secretary” of the parallel AN also had their arrest requests carried out by the attorney general.

The strategy of this sector of the Venezuelan opposition to create parallel institutions began in 2019, when the then head of Parliament Juan Guaidó decided to proclaim himself “interim president” of the country. At that time, Guaidó occupied the leadership of the AN elected in 2015, with an opposition majority, which was in contempt according to the Justice.

::The end of Guaidó’s ‘presidency’ reflects the exhaustion and crisis of the right wing in Venezuela::

Guaidó’s fictional “presidency” gave rise to the so-called “interim government”, a political group formed by deputies of the 2015 Parliament, parallel ministers and ambassadors and opposition allies who came to control companies and funds of the Venezuelan state abroad. The survival of this group was only possible due to the recognition that the US, Europe and some Latin American countries, governed at the time by the right, gave Guaidó.

Even after the 2020 legislative elections that defined the current National Assembly and ended the mandate of the 2015 parliamentarians, the “interim government” continued to unilaterally renew its functions, without submitting to electoral processes and relying less and less on international support.

In the last weeks of December, however, this sector of the opposition decided to end Guaidó’s “interim presidency” and the entire structure of the “interim” – ambassadors, ministers and company directors – keeping only the leadership of the AN and its former deputies .

“How is it possible that in 2023 these guys who are outside the law will proclaim themselves as a parliamentary commission to supposedly monitor the country’s assets abroad? They took advantage of extreme political circumstances, such as the arrival of Donald Trump to the US presidency to create a ghostly and fictitious government and trying to carry out coups d’état”, said the attorney general when announcing the arrest warrants.

::”Fixed judgment”: Venezuela protests against US decision on sale of oil company::

According to Saab, the MP is also investigating the fate of resources that this opposition group received from foreign governments or that were withdrawn from international Venezuelan funds. “A few days ago we learned from a US spokesman that the US had given this group called the ‘interim government’ the sum of 2.7 billion dollars. It is not about donated money, it is about money from the Venezuelan people that was stolen by this criminal group,” he said.

In an interview with the Efe agency published this Tuesday (10), former deputy Donirah Figuera denied the accusations of the Venezuelan MP and said that her opposition group “has always been criminalized and stigmatized”. “Yesterday, in fact, the illegitimate prosecutor Tarek William Saab again exercised excessive action against the three representatives of the National Assembly’s governing board,” she said.

US supports parallel AN

Despite accepting the end of Guaidó’s “presidency”, the US continues to recognize the parallel AN as the “only democratic institution” in Venezuela and does not consider re-establishing relations with the government of President Nicolás Maduro.

“Further attacks against the opposition, including against members of the National Assembly, impede democratic solutions for Venezuela. Efforts must focus on a path to free and fair elections in 2024,” he said.

Nichols’ statements were answered by President Nicolás Maduro on Monday night, who rejected the US stance towards the opposition and invited the secretary to meet “the true Legislative power” of Venezuela.

“Brian Nichols, if you want to know who the legislative branch is, which legislates and approves laws that are complied with by the 32 million citizens who live in our country, you would have to go to the Legislative Palace and talk to the board of directors,” said Maduro. .