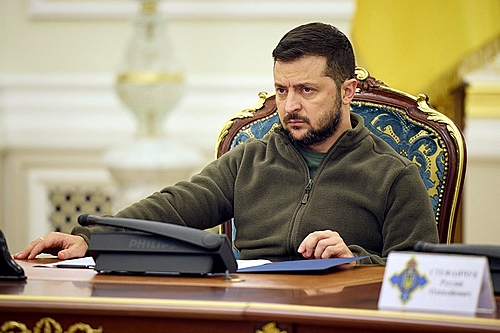 Ukrainian President Volodymyr Zelensky said on Tuesday that Moscow is planning a full-scale mobilization and is ready to launch a major offensive. Previously, Russia has denied it is deploying more troops.

Zelensky’s statement, according to him, took place in the context of telephone conversations with the prime ministers of Canada, the Netherlands, Great Britain and Norway, which he had on January 3. “Now is the time when, together with our partners, we must strengthen our defence,” he said.

“We have no doubt that Russia’s current masters will abandon all they have left and all they can muster to try to turn the tide of the war and at least postpone their defeat. We must thwart this Russian scenario. […] Any attempt at their new offensive must fail,” the Ukrainian president said.

Zelensky did not specify what “mobilization processes” Russia was preparing and when they might start.

On December 30, Ukrainian Defense Minister Oleksiy Reznikov said that in early January Russian authorities would close the borders to men, declare martial law and start another wave of mobilization. Kirill Budanov, head of the main intelligence department of the Ukrainian Ministry of Defense, said that a new wave of mobilization was supposed to start on 5 January.

:: Visit to the USA ensures “Hollywoodian” end of the year for Zelensky ::

Neither Reznikov nor Budanov explained where they got this information from. At the same time, the General Staff of the Armed Forces of Ukraine, in its report dated December 31, reported that there were data that lists of persons subject to recruitment for mobilization in January 2023 had been formed on the territory of Crimea, controlled by Moscow.

The first wave of partial mobilization of Russian citizens for the war in Ukraine was announced by Vladimir Putin on September 21st. The measure affected military personnel in reserve and those who served in the Armed Forces. In total, according to official data, more than 300,000 people were summoned to carry out training and be sent to the front.

Despite the increase in rumors about a possible new wave of mobilization in Russia, the country’s authorities have been denying the need to increase the convening processes.

On 28 October, Defense Minister Sergei Shoigu announced that partial mobilization had been completed. However, the decree of the President of Russia on the completion of the mobilization has not been officially published. On December 9, Putin said that there was no need for further mobilization in Russia today.

:: Lula talks with Putin and highlights the “search for a world without hunger and with peace” ::

Last Tuesday (3), the deputy of the Defense Committee of the State Duma (lower house of the Russian parliament), Andrey Gurulev, stated that there are no prerequisites for a second wave of mobilization for at least the next six months.

“There are no prerequisites and conditions for this. Even those who were previously mobilized are not yet fully committed to the battle. Well, our industry must also reach these milestones when it is able to provide the next wave of mobilization. My opinion is that it is simply inefficient to do this in the next six months”, said the deputy.