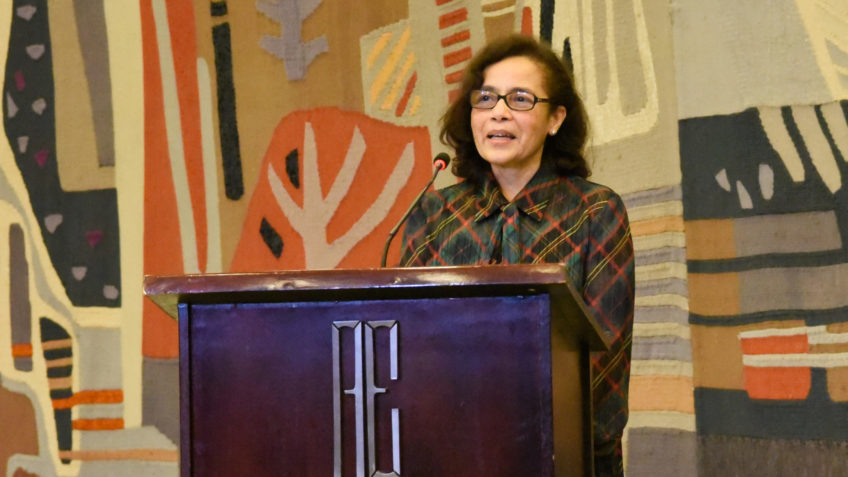 The secretary general of the Ministry of Foreign Affairs, Maria Laura da Rocha, said this Wednesday (4.jan.2023) that the world “I was waiting” the return of Brazil to the international scene. According to the diplomat, the country “sets the tone” for being a developing nation with solutions.

“When he doesn’t have solutions, he looks for and manages to adapt those that work for other countries. Our creativity and competence are very welcome on the international scene”said the diplomat in an interview.

Rocha took office as the new secretary general of the Itamaraty on Wednesday (4.jan), replacing ambassador Fernando Simas Magalhães. The function directly assists the Minister of Foreign Affairs and is responsible for managing internal structures. She is the 1st woman to occupy the 2nd most important position in the portfolio.

During her speech, the diplomat spoke about the reconstruction “of bridges” with countries and major debate forums, starting with South America and Latin America.

Brazil will also seek to strengthen ties and “setting in motion a new dynamic” in its relations with nations in Africa and Asia. Europe, the United States, China and the members of the Brics: Russia, India and South Africa were also mentioned.

Asked about the actions and timing of this closer relationship with foreign nations, Rocha stated that the matter is something “immediate”.

The event that will inaugurate the diplomatic policy of the Lula government will be the CELAC (Community of Latin American and Caribbean States) summit to be held in the Argentinean capital, Buenos Aires, on January 24th. President Luiz Inácio Lula da Silva (PT) will attend.

the chief executive must go too to Portugal, the United States and China until March 2023. For these destinations, the PT’s agenda is still being defined and there are no certain dates and orders.

The new government of Brazil has indicated that the country will regain a prominent position on the international scene. Already on the 2nd day of his term, Lula scheduled 17 bilateral meetings with representatives from abroad. However, he was unable to attend to all and met with only 10.

The Minister of Foreign Affairs, Mauro Vieira, also met with authorities from other countries. The diplomat took office on Monday (January 2) and spoke of a reappointment of the country after a “Unprecedented Retreat” in foreign policy.

On Wednesday (4.jan), Vieira, the governor of Pará and President of the Legal Amazon ConsortiumHelder Barbalho (MDB), and the mayor of Belém, Edmilson Rodrigues (Psol), held a meeting at Itamaraty. In it, Barbalho and Rodrigues presented a proposal to host the COP30, the 2035 UN Climate Conference (United Nations), in the capital of Pará.

From left to right, the mayor of Belém, Edmilson Rodrigues, the minister Mauro Vieira and the governor of Pará, Helder Barbalho, in a meeting at Itamaraty

In 2018, Brazil withdrew from candidacy to be the host of the event due to lack of resources and the transition process for the government of Jair Bolsonaro (PL). The announcement was made by Itamaraty.

According to the new Secretary General of Foreign Affairs, Brazil is “always prepared” to host large events.

“We’ve already shown that we’re capable of doing anything. Earth’s first major conference, Rio 92, was held in Brazil. It was a success. Then we did Rio+20, we did the World Cup, we did the Olympics. We have an organizational capacity, involving different sectors of society, which is very important. We are ready for anything”these.

Brazil will also assume the G20 presidency, a group formed by the largest economies in the world, in December 2023. The country will be responsible for chairing the summit, during President Lula’s government. The host city of the meeting has not yet been defined.

In the interview, Rocha also stated that there is a discussion at the Itamaraty for Brazil to present faster responses in relation to global issues, such as human rights, climate issues, fight against hunger, poverty and social inequality.

The diplomat considers that, although there are more complex issues, it is necessary that this goal be achieved.

“Because sometimes if it takes too long [a dar uma resposta] there is a void, which is not good in international relations […] All of this is very important on the external side as well, and very quick responses are always expected from Brazil. For that, we have to modernize our network because we are present all over the world”these.

On January 4, Itamaraty released a note criticizing Israel, something that goes against the policy of the government of former President Bolsonaro. According to the agency, it was accompanied “with great concern” the visit of the Minister of National Security of Israel, Itamar Ben-Gvir, to the Esplanade of the Mosques (“Haram-El-Sharif”), in Jerusalem.

The site, called the Temple Mount by Jews, is sacred to both Islam and Judaism, but only Muslims have free entry. It is also a frequent scene of conflicts between Israelis and Palestinians.

The minister’s visit, on the morning of Tuesday (Jan 3), was interpreted as provocation and caused protests in several locations.

In the statement, the Brazilian government asked that “the historic status quo of Jerusalem” be respected. “Actions which, by their very nature, incite the alteration of the status of holy places in Jerusalem constitute a violation of the duty to care for mutual understanding, tolerance and peace”wrote Itamaraty.

In honor of the inauguration of the 1st woman to assume the General Secretariat of Foreign Affairs, the diplomats present at the event were dressed in lilac, the color adopted by the suffragist movement, in 1908, in the mobilization for the right to vote and still used to represent the feminist movement. 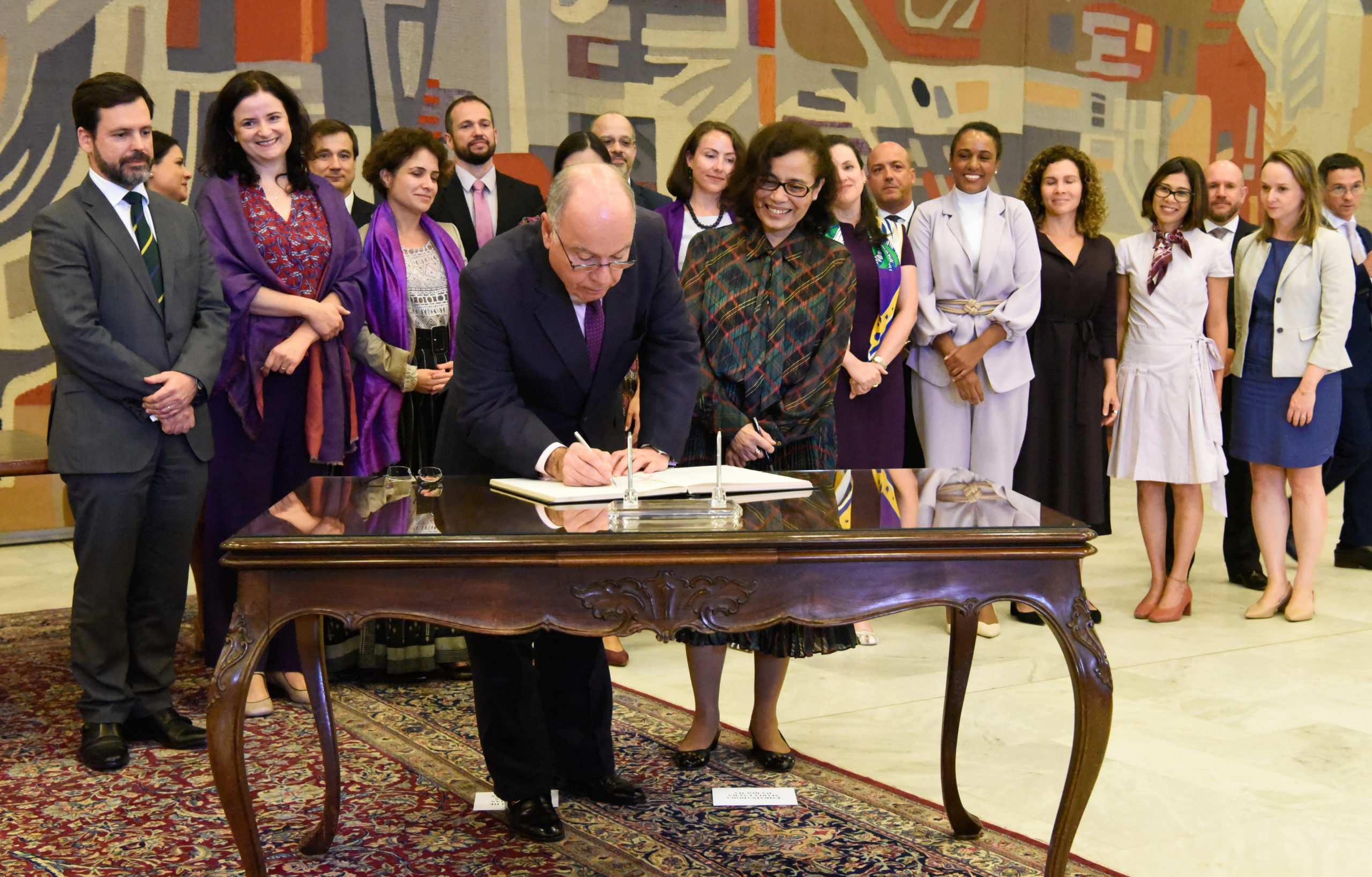 The Minister of Foreign Affairs, Mauro Vieira, and the Secretary General, Maria Laura da Rocha, during the inauguration ceremony of the diplomat. In the background, it is possible to see other diplomats with props in shades of lilac

Maria Laura da Rocha stated that the symbology of this has great weight. “It is important for them to open doors for women. I think that the more women are reaching the top of the career ladder, the more visibility there is that it is important, that it is possible, for women to be where men are as well”these.