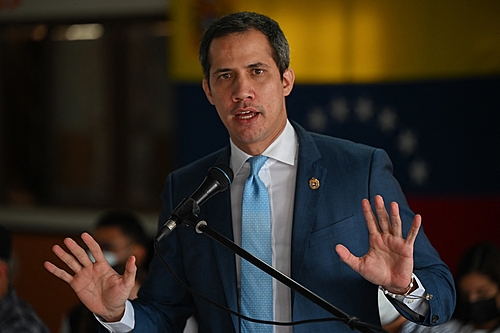 After spending years boycotting elections and betting on the creation of a “parallel institutionality” to force a change of government, the main sector of the Venezuelan right shows signs of exhaustion and decides to reconfigure itself politically. In the last weeks of December, three of the four main opposition parties ended the biggest political device used in their strategy since 2019: the “interim presidency” of Juan Guaidó.

Gathered in what they call a “legitimate National Assembly”, a kind of parallel legislature composed of former deputies elected in 2015, 72 of the 104 former parliamentarians who made up the “interim government” agreed to dismantle Guaidó’s fictitious office because they considered that ” The political process that began on January 23, 2019 has weakened and is not seen as a real option for change”.

The decision had been taken during the first vote that took place on December 22nd and was ratified in a second meeting held on the 30th of last month. Guaidó and close allies tried to postpone the second meeting, but were unsuccessful.

According to the resolution prepared by the parties Ação Democrática, Primeiro Justiça and Um Novo Tempo, the “interim presidency” and all the alleged positions connected to it will be closed when the parallel National Assembly resumes its activities next Thursday (5).

In practice, the entire fictitious structure of ambassadors, ministers, advisers and directors of state-owned companies will be dismantled to make way for a commission composed of five former deputies. The control of this opposition sector over the assets belonging to the Venezuelan State abroad – which became the main source of income for the “interim” – will be maintained, since the “interim directorates” of PDVSA and the Central Bank will continue to exist.

“The first thing that must be said about this process is that there is a serious crisis of political leadership in Venezuela’s opposition sectors”, he explains to Brazil in fact the Venezuelan political scientist Luis Díaz. For the researcher, the crisis is a reflection of the failure of the “maximum pressure” strategy adopted in recent years, which consisted of boycotting elections and asking Washington to expand the sanctions package to asphyxiate the country economically and try to overthrow the Maduro government.

“From a rhetorical point of view, sanctions are supposed to affect only the government, but in practice the blockade affected the entire population, affected the economic development of all sectors of Venezuelan society, including businessmen and entrepreneurs,” he says.

The exhaustion of the policy of sanctions and “maximum pressure” would be behind this rearrangement of forces within the Venezuelan right, as internal and external economic sectors began to face the US blockade as an obstacle to their own interests.

“Right now there is a need for a change of alliances, to lift sanctions and above all to bring Venezuela back into the international context, mainly because of the energy issue due to the consequences of the conflict between Ukraine and Russia. and, certainly, for the US government, the interim period was already something very uncomfortable and difficult to support”, he says.

President Joe Biden’s government spoke out this Tuesday (03) about the political changes made by the opposition. At a press conference, US State Department spokesman Ned Price said the country would continue without recognizing Maduro’s presidency, but referred to Guaidó as a “member of the National Assembly” and no longer as “interim president”. ”.

The position marks a turning point in Washington’s treatment of Guaidó, who, until then, was considered “president” by the White House. Despite having shown some signs of rapprochement with the Maduro government throughout 2022, Biden had been maintaining the strategy of his predecessor, Republican Donald Trump, to consider the former deputy as head of the “interim government”.

Citgo and Gold: Who Controls?

The US role will also be decisive for the future of Venezuelan companies and funds that are blocked abroad. This is because it was the recognition given by Washington and by European countries allied to the “interim” that allowed Guaidó’s allies to control these assets.

Through the “interim management” of PDVSA, the subsidiary of the Venezuelan state oil company Citgo, which owns a network of refineries and service stations in the US whose assets are valued at around 10 billion dollars, passed into the hands of the opposition led by Guaidó . The opposition’s “Central Bank” is responsible for managing funds and reserves such as, for example, the 31 tons of gold that are held at the Bank of England.

This Tuesday, the State Department spokesman also referred to Venezuelan assets abroad and said that the sanctions program continues, but recognized the need to discuss the issue with opponents. “I understand that the members of the National Assembly are discussing among themselves how they will handle the assets abroad. We will continue to discuss this topic with them,” he said.

::”Fixed judgment”: Venezuela protests against US decision on sale of oil company::

For Diaz, it is unlikely that Washington will give up having some influence on the future of these assets, as returning the companies and funds to the Venezuelan State would imply recognizing the authority of the Maduro government, something that the researcher believes is not on the horizon of the White House.

“The interim boards of PDVSA and the Central Bank will be mechanisms that the US government will surely recognize in order to maintain legitimacy because it cannot, from its political point of view, maintain a direct relationship with the government of Nicolás Maduro. I think there will be a so-called two-track relationship, that is, openly they will not recognize Maduro, but the opposition sectors, but pragmatically they will seek closer ties and points of common interest with Caracas”, he says.

The return of companies and reserves blocked abroad is one of the main demands of the government at the negotiating table with the opposition installed in Mexico and resumed in November this year. In the last round, the opposing delegation agreed to unlock around US$3 billion that will be earmarked for investments in the public health system, electricity service, school infrastructure, food programs and attention to emergencies caused by natural disasters.

::Maduro signs agreement with opposition and calls for end to sanctions before presidential election::

In addition, the government demands the suspension of all sanctions and the release of businessman Alex Saab, detained in the US accused of money laundering and corruption. The opposition, on the other hand, calls for the definition of rules and electoral schedule to establish the conditions for the next presidential election scheduled for 2024.

Fragmented into many parties of different ideological spectrums, the Venezuelan opposition can be classified into at least three major sectors. There is a sector that houses parties from the center and from the right, which occupies seats in Parliament, participates in electoral processes and meets in the so-called Democratic Alliance, a coalition that today has the minority group in the National Assembly.

The sector led by Guaidó was known until then as G4, for grouping the four largest right-wing parties in the country. This opposition faction was responsible for building the “interinato” and, after boycotting most electoral processes in recent years, today it does not have legislative representation.

In addition, a fraction of the radical left opposes the Maduro government and has the Communist Party of Venezuela (PCV) as its main party representative.

Since the beginning of 2022, the G4 had been advocating the holding of primary elections to define a presidential candidate who could unify their proposals and, supposedly, reach the 2024 election with more force. vote – June 2023 – several obstacles already seemed to make it impossible for the parties in this right-wing sector to reach a consensus on the election rules.

::Lula says Guaidó was “an imposter” and defends alternation of power in Venezuela::

Now, with internal political changes and the end of Guaidó’s “term”, analysts see the primaries increasingly distant. Venezuelan lawyer Leonardo Morales, former rector of the country’s National Electoral Council (CNE) and leader of the opposition party Avanzada Progressista – which is part of the Democratic Alliance coalition – told the Brazil in fact that, given the current crisis installed in the G4, the most likely thing is that the primary elections will not take place.

“Of course, we have to wait for the developments, but if the internal pressure becomes a kind of grenade that fragments this sector of the opposition to several sides, there will be no point in holding primaries”, he says.

Morales also says he does not believe that the primaries could unify the opponents, “because they are looking for a technical solution to solve a problem that is actually political”. consider that it takes more time to build relationships of trust between actors.

“In 2018 we were able to change presidents, we didn’t change because the G4 decided to abstain. Soon after, for the National Assembly, they could have had an important representation, perhaps even the majority again, and it was not possible because a part of the opposition decided to abstain. So there was a very uncomfortable relationship that needed time to find an agreement, which still needs time, that is, it is not a simple process, we need to start to have trust, that the opposition starts to have trust with each other”, he says. .