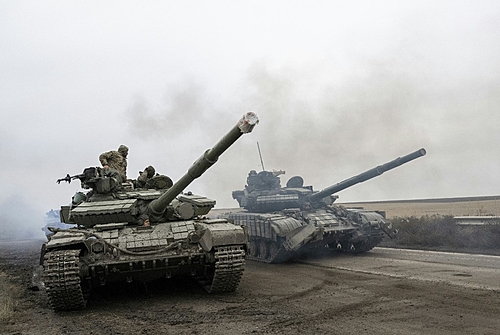 Russian authorities are engaged in punishing citizens who left the country after the outbreak of war in Ukraine. Throughout December, a series of punishments were suggested in press statements and demonstrations in Parliament. In particular, raising taxes and banning remote work in certain sectors of the economy for critics of the military operation in Ukraine who have left the country is discussed.

At the end of December, the speaker of the Duma (lower house of the Russian Parliament), Vyacheslav Volodin, said that deputies are developing a bill to increase the tax rate of emigrants. He went so far as to declare that an “overwhelming” part of society considers the departed to be “traitors”.

“It is right to cancel the preferences for those who have left the Russian Federation and introduce an increase in the tax rate for them. That will be fair,” Volodin said, adding that work was ongoing “on the relevant changes in legislation.”

The Duma chairman also noted that “to this day, those who left not only work remotely in Russian companies, but also enjoy all the benefits that this provides them under the legislation of our country.”

“It is perfectly understandable why they ran away. Those who realized that they made a mistake have already returned. The rest must understand: the vast majority of society does not support their act – they believe that they have betrayed their country, relatives and friends,” Volodin said referring to the critics of the war in Ukraine.

In an interview with Brazil in Fact, economist Alexandra Suslina points out scenarios that may be motivating the government’s undertaking against Russian citizens who have left the country. The first option, according to her, is that the statements are part of political agitation and the desire to “punish” critics of the Kremlin abroad, but it could end up leading nowhere, and the agenda could be gradually left aside. On the other hand, the researcher points out that this could actually become a kind of new political agenda of pressure on emigrants who are critical of the government.

“There is the variable that this will really be a kind of new agenda, and an exclusively political agenda, because from a fiscal point of view, there is no measure that can be taken by the government against emigrants that has a sufficient amount that it makes sense to develop that,” he says.

Another legislative initiative that has been suggested by the ruling United Russia party is to ban Russians in certain occupations from working remotely outside the country. In particular, the sectors to be hit would be public, banking, transport and information security. The expectation is that the amendments to the Tax Code will be submitted to Parliament at the beginning of this year.

For Alexandra Suslina, measures of this type could even harm the Russian economy because, according to her, the condition of an employee who left the country but continues to work for a Russian company is, in principle, beneficial for the country’s economy. The analyst argues that if a Russian company is willing to keep the employee at a distance instead of looking for another person inside the country, it means that “this person is so valuable to the company, that with his help, the company achieves profit , works efficiently and pays taxes to the Treasury”.

Residential building damaged after a Russian attack in the Ukrainian city of Zaporozhye on October 10, 2022. / National Police of Ukraine / AFP

“That is, at first for the State, this is advantageous, for companies to operate at a profit. What happens if the State, based on political decisions, prohibits these people from working like that? Or adopts such strict sanctions to companies that they be forced to fire these people? The profit of these companies will decrease and taxes to the Treasury will also decrease. That is, if the government has a broader view, it will see that these measures of punishing and not letting certain people be able to work outside the country will reach the budget of the Russian Federation”, he argues.

There is no precise number on how many Russian citizens would have left the country since the beginning of the war in Ukraine, but several studies point to different rates, ranging from 150,000 to 800,000 people who would have emigrated in the first wave after the outbreak of the conflict. This represents the largest wave of emigration in the country’s recent history.

At the end of September 2022, a week after the announcement of the call-up of new soldiers to fight in Ukraine, at least another 200,000 people left Russia in just nine days.

The issue returned to the political discussion this week after the former president and current deputy head of the Security Council of Russia, Dmitry Medvedev, declared on his Telegram channel that “if the laws do not work”, it is necessary to act in accordance with the “rules of war” against those he called “traitors”.

“In times of war, there were always these special rules. And quiet groups of impeccably discreet people who actually enforce them,” Medvedev said, without specifying what he meant by “silent reprisals”.

The post came in the context of a statement by another State Duma deputy, Oleg Morozov, who proposed banning entry to Russian citizens who left the country for criticizing the government.

Both statements were seen as a response to the chairman of the Committee on Constitutional Legislation of the Federation Council, Andrey Klishas, ​​who had previously declared that the initiative to economically harm Russian citizens who have left the country and criticize the country is “unconstitutional and therefore unrealizable”.

Economist Alexandra Suslina points out that an obstacle for these projects to punish emigrants who are critical of the government is the feasibility of identifying and distinguishing who the government really classifies as “traitors” or not. However, she points out that this discussion has an extremely political character in the context of the war with the neighboring country. According to her, “when you act in an extra-legal field, and now all Russians are in a non-legal field, then unfortunately there is complete indeterminacy”.

“This is a symbolic and political arrangement, because from a fiscal point of view, the resources that will be spent, the efforts and the time that will be spent to find, identify and punish these people will be much greater than the revenue gained in this process. . So from a tax point of view this is absolutely not advantageous”, he adds.