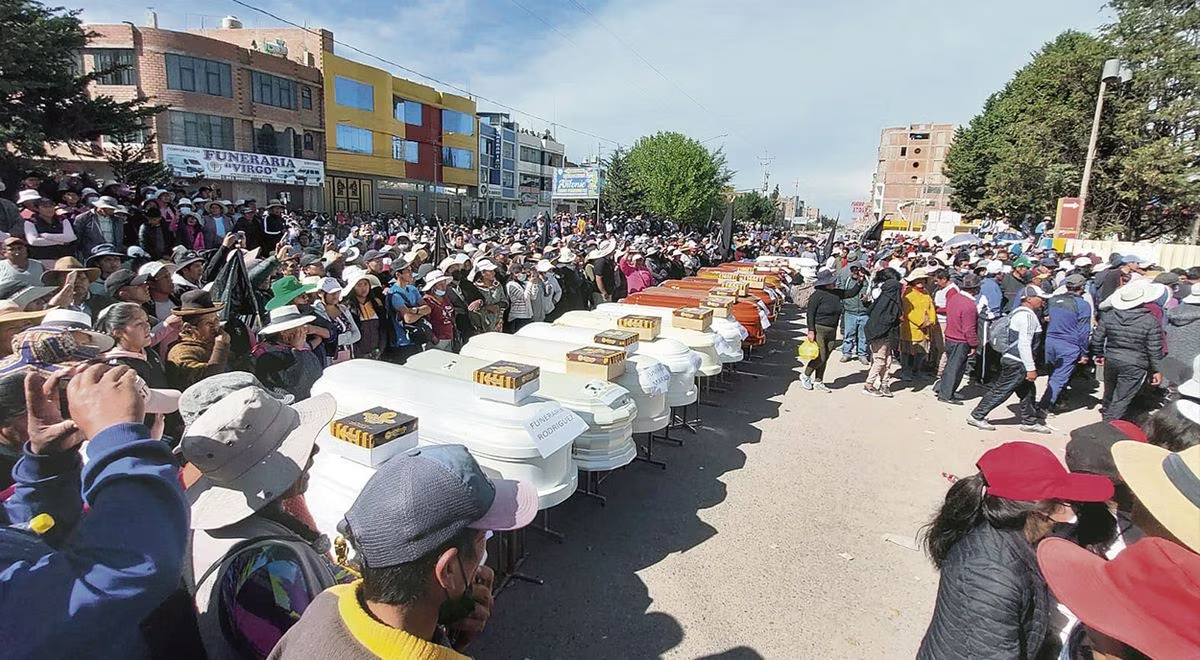 Public wake of those killed in protests in Puno. Photo: The Republic

Peru has extended the state of emergency in several regions of the country, including the capital, Lima, after protests against President Dina Boluarte spread with violent and deadly repression by security forces. 49 people have already died during the acts since the arrest of former president Pedro Castillo. Despite the political crisis erupting on December 7, with the arrest and overthrow of former President Pedro Castillo, the violence and hardening of the government seem to prolong the conflict indefinitely.

The decree is valid for 30 days and allows, among other serious measures, for the Army to join the police in monitoring the protests. In addition, the order suspends individual rights, such as the freedom to come and go and the principle of inviolability of homes. In Puno, the epicenter of the protests, the curfew was also extended for ten days, from 8 pm to 4 am local time.

International analyst and political scientist, Ana Prestes, considers this “a very dramatic situation, with no solution in sight”. He explains to red portalthat the Congress in Peru has a lot of power and will not give up its mandates to run for new elections.

“I only see the possibility of overcoming this impasse with international support. I hope there is regional support to reopen the dialogue, otherwise it will just be killing from now on”, warns the sociologist.

She notes that the former president of Bolivia, Evo Morales, tried to open a dialogue, because he has a lot of influence on the Aymaras and Quechuas, who also organized to join the protests. However, Evo has been banned from entering the country and the Peruvian Attorney General is trying to incriminate him.

Disapproval of the government

Research by the Institute of Peruvian Studies, released by the newspaper La República, points out that 71% of the population say they disapprove of the way Dina conducts the government. Only 19% of citizens said the opposite. Castillo, in turn, has 30% support for his attempt to close Congress and call new elections, treated as a coup by parliamentarians.

Those who defend the release of the former president are 60%. The situation for congressmen is even worse, with 9 out of 10 Peruvians criticizing parliamentary performance. The survey also found that 58% of Peruvians say they believe that police officers overreacted during the protests.

On Friday (13), the Public Ministry confirmed the opening of 11 investigations into the deaths caused by the police forces. The investigation involves Dina, the Prime Minister, Alberto Otárola, and other authorities, suspected of the crimes of genocide, qualified homicide and serious injuries.

Ana agrees that the polls reveal a delegitimization of the Congress and the Government of Peru. “Even the conservative and Fujimori press was very vocal about last week’s deaths. This sensitizes the middle class a lot. With that, the survey goes beyond this popular sphere of dissatisfaction with the government,” she said, referring to the fact that the protests take place mainly in poorer regions of the country.

Although the poll reveals that 60% of the population is against Castillo’s arrest, there is no movement towards his release. “On the contrary, the Supreme Court ruled at the end of December, for his preventive detention for an even longer period, of 18 months. This after the defense appealed for him to be tried in freedom, ”he said.

That is, instead of opening a dialogue to reduce the tension that only grows, “the government takes a tough line, restricting people’s mobility to make marches and blockades not possible”. The acts, considered riots by the authorities, should gain new impetus this Monday (16).

Protesters demand the resignation of the president, the release of Castillo, the dissolution of Parliament and the anticipation of elections for this year. Another demand is the convening of a Constituent Assembly. There is enormous dissatisfaction with the Constitutional Charter promulgated in 1993 by the dictator Alberto Fujimori.

Read also: Protests grow across Peru and Boluarte puts the Army in the streets

The government’s fear is that the scenes of violence registered in the Andean regions in recent weeks will be repeated in the country’s capital. This Sunday (15), nearly 100 stretches of highways were blocked in 10 of the 25 regions, mainly in areas close to the borders with Bolivia and Chile. The losses in Cusco, with the loss of tourism to Machu Picchu, are around R$9.5 million per day.

Peru is experiencing a very strong social fragmentation, according to Ana, including geographically. “There is a large concentration of elites and oligarchies in Lima and the metropolitan region, and an impoverished population spread throughout the rest of the country”, she says, referring to the protests that are intensifying mainly in regions such as Puno, Cusco, Apurímac, Moquegua, Madre de Dios, Ayachucho and Arequipa.

“When a popular leader like Castillo is arrested, they are messing with a population that has seen itself represented at the ballot box, after a long time,” he pointed out. Castillo is a rural teacher, unionist, and represents a systematically excluded base and population in Peru. That is why the demonstrations take place mainly in the south of Peru, in Castillo’s regions of origin, where the most violent protests take place.

Furthermore, she says, Peru has a very fragmented, disorganized and unspoken left. There is New Peru, Free Peru, movements and unions that are strong, but do not understand each other. “The disorder in this popular protest ended up giving rise to repression and brutal violence”, she evaluates.

The analyst says that the crisis in Peru has been going on for a long time. In this last period, she perceives the protests and appeals of the Fujimorist elite to the electoral process, as soon as Castillo’s victory was confirmed. Her government was sworn in in July 2021 under the sign of institutional contestation. Congress tried to remove him twice, just this first semester. There are several cabinet changes and enormous difficulty in achieving governance, even in his own party.

On December 7, Castillo made a statement in which he appealed to the article of the Constitution that allows the president to close Congress and call new general elections, provided certain conditions are met. “The demonstrations reveal that he has mass support, but no institutional, military, parliamentary support. Without that, he was quickly arrested, jailed and is in pre-trial detention pending trial”, he analyzes.

His deputy, Dina Boluarte, is sworn in immediately by the unicameral parliament of 130 deputies. From the 7th of December, the demonstrations begin. Before the end of the year, more than 30 people had already died, while last week 19 died in a few hours.

At the end of December, there was already an assembly of movements that had deliberated for an open-ended strike starting on January 4th. With that, January 2023 is already tense in the country.

On the other hand, Interior Minister Victor Rojas decided to mobilize police forces for a counter-march, in an unconstitutional attitude for involving police officers in political demonstrations. Peru Libre demanded Rojas’ resignation for violating the constitutional order by inciting the police against opposition to Boluarte.

Ana says that, on New Year’s, Peruvians have the custom of burning dolls. With that, New Year’s Eve was full of protests with dolls of Dina Boluarte and her Prime Minister Alberto Otárola being burned by the people.

Dina Boluarte avoids speaking out or appearing publicly. “She even went to Cuzco and was practically thrown out of there, due to the very bad approach. As it is a tourist region, she appealed to the economic side, saying that they are the ones who lose with the protests”, said Ana.