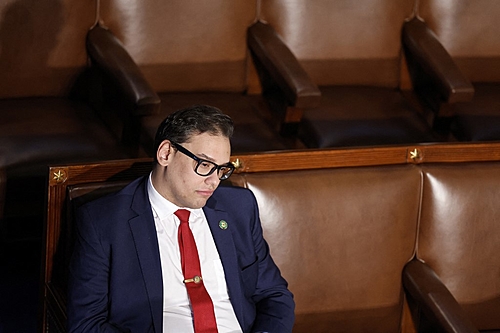 Santos, 34, admitted he lied about his resume and family background. In addition, his personal and campaign finances are under investigation after a report by the American newspaper The New York Times reveal fraud. Despite pressure from the party itself and the Democratic opposition, Santos again stated this Wednesday that he will not leave office.

“He disgraced the House of Representatives,” Joseph Cairo, chairman of the Republican Committee for Nassau County, New York, told a news conference. “He is not welcome here at Republican headquarters,” he added.

At the local level, the party does not have the power to remove Santos from office. The Brazilian took office last week.

On Tuesday, two New York Democrats asked the lower house ethics committee to investigate Santos. In a letter, Ritchie Torres and Dan Goldman said Santos failed to provide “timely, accurate and complete” financial disclosure reports, and that those he has provided are “scant and baffling”.

According to the group, the “mountain of lies” that Santos propagated during the campaign, about his life story and qualifications, should lead the commission to “thoroughly investigate” what must be “equally blatant lies about how his campaign raised and spent money”.

Santos was elected by the 3rd district of the state of New York, which includes the borough of Queens and Long Island.

Initially, the victory of him, an openly gay Republican who won his party a seat in the House of Representatives occupied by Democrats a decade ago, was seen as one of the positive points of his party in a very disappointing election for Republicans.

But when reports began to surface that Santos had lied about his Jewish ancestry – and even that his family had survived the Holocaust – and about a career at major Wall Street companies, as well as a college degree, the congressman turned into a embarrassment to the party.

Santos is a staunch supporter of former President Donald Trump and first ran for Congress in 2020, losing to Democrat Tom Suozzi. The Brazilian ran again in 2022, facing Democrat Robert Zimmerman, this time winning.

After the revelations of NOWZimmerman said that Santos is unfit to hold office and asked for his resignation, in order to allow the holding of new district elections.

Santos’ lies came to light when the NOW published in December that the congressman lied about a series of data that appeared on his resume, such as when he stated that in 2010 he had graduated in Finance from Baruch College in New York, and that he had worked at Citigroup Bank and Goldman Sachs Investment Bank.

The three entities declared to the NOW not having found any record of Santos in their files. After the report, he confessed that he lied about having a university degree and having worked in banks.

The newspaper also cast doubt on the functioning of the Friends of United Animals protection association, which would have been created by the republican, and classified its financial consulting firm, Devolder Organization, as “some kind of mystery”.

In his statement of accounts presented in September to the House of Representatives, Santos guaranteed that the company paid him a salary of US$750,000 (almost R$4 million) and dividends between US$1 million and US$5 million.

But, according to NOWthe form did not include “any information about customers who may have contributed to such deposits, in apparent violation of the requirement to disclose any compensation in excess of $5,000 from a single source”.

Earlier this month, the NOW reported that the Public Ministry of Rio de Janeiro would reopen an investigation against Santos, indicted for embezzlement.

The inquiry into the case was suspended after he went missing and authorities were unable to find him for nearly a decade. According to NOW, in 2008, aged 19, Santos would have used stolen checks to buy items at a clothing store in Niterói. Using a false identity, he would have paid BRL 2,144 for the products, with the stolen checkbook.

In 2011, he was accused of embezzlement. The process, however, was archived in 2013, after the authorities saw their attempts to find the deputy frustrated.

According to the newspaper Folha de S.Paulothe Public Prosecutor’s Office informed that, with Santos’ election, his whereabouts have been identified and a formal request will be made to the US Department of Justice for him to be notified of the charges.

In the last week of 2022, in an interview with New York Post, Santos denied committing crimes in Brazil or the United States. However, in 2009 he would have admitted to the police the theft of the checkbook, from an old employer of his mother.