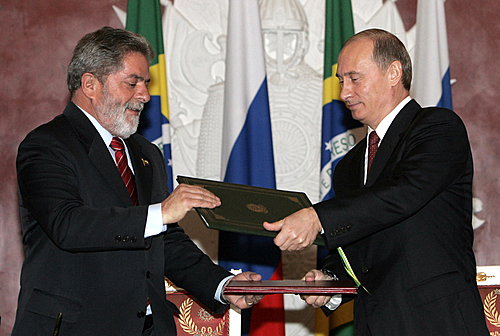 Russia’s government has a history of reaching out to far-right leaders around the world. The good relations with the Hungarian Prime Minister, Victor Orban, the French National Regroupment, the former US President, Donald Trump, are some of the most notorious examples of this movement.

Former President Jair Bolsonaro also cultivated rapprochement and moments of sympathy with Russian leader Vladimir Putin. However, in the Brazilian case, Russia adopts a more pragmatic and less ideological stance. The Kremlin’s favorable position in relation to the Lula government was explicit with the PT’s victory in the elections, when the Russians issued a note congratulating Lula on the election, highlighting his “high political authority”, and it became even clearer with the vehement condemnation of coup acts promoted by Bolsonarist groups, on January 8.

The spokeswoman for the Russian Ministry of Foreign Affairs, Maria Zakharova, highlighted that Moscow considers unacceptable attempts to violate the constitutional order in Brazil. Russian presidential spokesman Dmitry Peskov said the Kremlin “condemns in the strongest possible terms the instigators of unrest in Brazil”.

The professor of International Relations at the University of Saint Petersburg, Victor Jeifets, in an interview with Brazil in fact, points out that the coup acts were promptly condemned by Russia in unison with the position of countries like the United States, United Kingdom and Germany. However, the researcher points out that in Russia the events in Brazil did not fail to generate a particular repercussion in relation to Western countries.

According to him, diplomats from the Russian mission to the UN, in addition to a series of repercussions on Telegram channels (the main Russian social network), expressed criticism of the West for condemning or supporting coup manifestations around the world according to its convenience, accusing the US and European Union countries of “double standards”.

“If Biden had not come out clearly and obviously in support of Lula, then Russia’s support for Lula would be much clearer. Russia has a good relationship with Lula, Russia considers Lula as a friend, but Russian elites they really want not to manifest themselves in the same way as Biden, although in this situation they think the same way.

Russian condemnation of the coup acts came from the Kremlin spokesman and members of the Senate, but there was no open statement from President Vladimir Putin.

“At first, Russia spoke in unison with Biden, [Emmanuel] Macron, but apparently, precisely because of this, the Russian mission to the UN decided to make some additions. ‘Double standards’ because when there are demonstrations against Lula’s government, there is talk of a fascist uprising, and that is correct, but there was an example in Maidan, in Ukraine, and there, too, there was support [do Ocidente]. There is logic to these statements. I wouldn’t say completely, but there is a logic, because in both cases the president was legally elected”, adds Jeifets.

Russian criticism of the West’s position refers to the Ukrainian demonstrations of 2013 and 2014 that resulted in a coup d’état in the country. At the time, a wave of demonstrations took over the Ukrainian capital of Kiev, when a large part of the country’s population took to the streets to protest against the alignment of then-President Victor Yanukovych to Russia and to ask for greater integration with the European Union.

US and European officials openly supported the anti-Yanukovich protests. Russia considered that the Ukrainian crisis was caused by interference from the West, using Ukraine to harm Russia. It was the beginning of the crisis between Moscow and the West, which reached its peak with the outbreak of war in Ukraine.

“Russia’s foreign policy is dualistic. On the one hand, it seeks partners to establish relations, and on the other hand, in the conditions of serious confrontation and competition with the West in recent times, there is an understanding of the need to look for ways to provoke the competitors from the western bloc”, says Jeifets.

This dualism of Russian foreign policy can also be illustrated if we consider the association between the coup acts in Brazil with the invasion of the Capitol in the USA by supporters of Donald Trump. On the occasion, when far-right protesters interrupted the session of the US Congress that certified the victory of Democrat Joe Biden in the elections, the Russian Foreign Ministry took the opportunity to criticize the US electoral system, classifying it as “archaic”. In the Brazilian case, Moscow reinforced Lula’s political authority.

The professor of International Relations at the University of Saint Petersburg observes that the Russian leadership “at some point came to the conclusion that the right can generate more prosperous alliances than the left”, but, particularly in relation to Latin America, “the Ministry of Foreign Affairs of Russia takes a legalistic position”.

“It is an old tradition of the Russian chancellery, at least in relation to Latin America. Russia has always sought, above all, to work with the government in office. Very rarely has it sought to work with oppositions”, highlights Jeifets.

Lula’s role in relation to the war in Ukraine

During the election campaign, when commenting on the war in Ukraine, Lula harshly criticized Ukrainian President Volodymyr Zelensky and the West, stating that the Ukrainian leader is “as responsible” for the war as Vladimir Putin.

“Him [Zelensky] he keeps thinking he’s the king of coconuts, when in fact they should have had a more serious conversation with him: ‘Hey, man, you’re a good artist, you’re a good comedian, but we’re not going to make a war for you to appear’. And say to Putin: ‘Hey, Putin, you have a lot of weapons, but you don’t need to use weapons against Ukraine. Let’s talk!'”, said Lula, in May 2022.

The PT’s declarations had great international repercussions and caused a shudder with Kiev, which even included Lula’s name on a list organized by the Ukrainian government of people who support Russia’s narrative about the war. Subsequently, the name of the Brazilian president was removed from the list.

From the Kremlin’s point of view, Lula’s position reinforced the positive outlook for relations between Russia and Brazil.

The director of the Council of International Affairs of Russia, Andrey Kortunov, recalls that neither Lula nor Bolsonaro supported western sanctions against Moscow, which reinforces Russia’s pragmatic discourse in relation to Brazil.

“At the same time, [Lula] da Silva might be a little more active. For example, in the case of trying to act as one of the mediators in resolving the Russian-Ukrainian crisis,” Kortunov told Moskva 24.

However, the analyst points out that the issue of relations with Russia in the near future will not be the main focus of the Brazilian government, as “Lula da Silva will probably focus on domestic issues, and not on international politics.”

The professor of International Relations at the University of Saint Petersburg, Victor Jeifets, points out that the more neutral position of the Brazilian president in relation to the war in Ukraine does not translate into support for Russia in the context of the conflict.

According to him, the expectation that Lula will continue his line, pronounced in 2022, when he firmly criticized the president of Ukraine, is “unfounded”, because “one thing is Lula as a candidate, another thing is Lula as president”.

“Lula made it very clear that he is ready to be a mediator, ready to help in peace negotiations, but in principle Brazil cannot support changes in territorial borders without an agreement between both parties, so here I think it is not worth expecting that Brazil is an ally on this issue. If part of the Russian elites expect this, they are not fully understanding the inclination of the Brazilian elites”, he says.