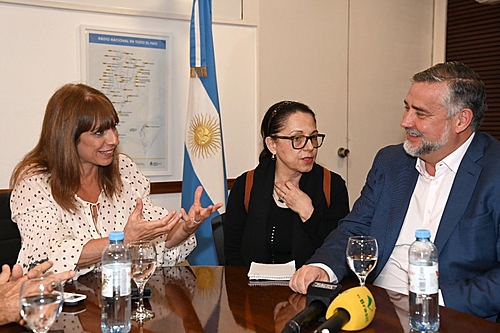 The chief minister of the Secretariat for Social Communication of the Presidency of the Republic, Paulo Pimenta, visited today (20) the installations of Public TV of Argentina (TVP), in Buenos Aires. He is in the Argentine capital for meetings prior to the trip of President Luiz Inacio Lula da Silva, who leaves for Argentina next Sunday (22) for the first international trip of the new mandate.

After the visit, in an interview with TV Brasil, from Empresa Brasil de Comunicação (EBC), and TVP, Pimenta stated that he intends to sign a cooperation agreement between the two channels for the exchange of experiences.

“The work of public communication in Argentina is very well known and respected. On public TV, on the radio, in the news agency”, he highlighted.

“We want the first agreement of Empresa Brasil de Comunicação, EBC, now under Lula’s government, to be signed with public TV in Argentina, with the Argentine public media”, he added.

TVP is a broadcaster of Radio and Television Argentina (RTA), a public company responsible for managing public TV, National Radio, Canal 12, Regional Public TV and the Argentine Broadcasting Service Abroad. It was created by the Audiovisual Communication Services Act of 2009.

The company also manages the news agency (Télam) and the Canal Encontro (Encuentro), which offers a program of documentaries, debate programs and independent productions.

Minister Paulo Pimenta also commented on the recent changes in the command of the EBC, with the dismissal of the former board and the appointment of a provisional command made up of public servants and representatives of civil society and the government.

“We constituted a provisional board, with representatives of public servants, civil society, and now, in the next few days, we are going to indicate the names that will compose the new company, which will be responsible for this new phase of public communication in Brazil”, he said.

Lula’s trip to Argentina inaugurates a series of international trips by the president in his third term as head of the Brazilian government. In addition to visiting Argentina, Lula will also go to Uruguay and, next month, to the United States. A trip to China in March is also confirmed.

In addition to the bilateral agenda in Argentina, on Monday (23rd), Lula will participate in the summit meeting of the Community of Latin American and Caribbean States (Celac), a collegiate body in which Brazil returned to participate, after having withdrawn during the government of Jair Bolsonaro. This meeting takes place on Tuesday (24). The following day, the president pays a visit to Uruguay and then returns to Brazil.

According to Paulo Pimenta, the expectation of the visit is the signing of a broad agreement involving different areas of the bilateral relationship. “It will be the most important partnership agreement signed to date between Brazil and Argentina”, he emphasized. He highlighted the symbolism of the destination of Lula’s first international trip in this mandate.

“It is also a demonstration of respect and recognition of what the partnership with Argentina means to us, and especially a project for all of South America and Latin America,” he said.