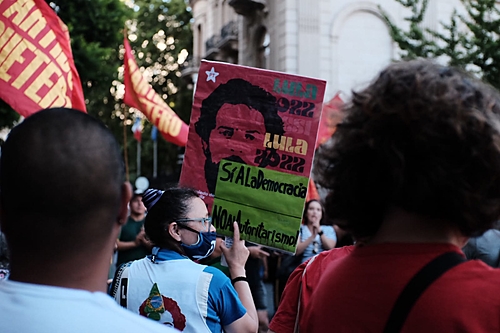 Newspaper headlines in Argentina were dedicated to the Bolsonarist attack in Brasilia and the unfolding of the case during the first days of this week. The country that will be the destination of the first international visit of President Luiz Inácio Lula da Silva (PT) pays special attention to what happened in the neighboring territory, a strategic partner in terms of trade and political alliance.

According to the presidential agenda, Lula will land in Argentina on the 23rd, where he will meet with President Alberto Fernández and participate in the next summit of the Community of Latin American and Caribbean States (CELAC), on the 24th, in Buenos Aires. Brazil participates in this meeting as a special guest, since the country withdrew from CELAC under the government of Jair Bolsonaro (PL).

“The coup attempt was very strong in Argentina, due to the proximity, affinity and importance that Brazil has for Argentina”, highlights journalist and international analyst Gerardo Szalkowicz, mentioning the majority repudiation of the attack by the Argentine political arch.

Flags of Brazil and Argentina during an act for democracy in Buenos Aires, in repudiation of the coup attack in Brasília / Juliano Mazzuchini

The Argentine ambassador to Brazil, Daniel Scioli, classified what happened as being “much more serious than what happened in the Capitol”, in an interview with Argentine radio Rivadavia, on Monday (9). “It is an unprecedented, unprecedented event of violence and a terrorist and coup-like attitude,” said the ambassador. “There is a great deal of questioning about the military police and security forces.”

“We know Lula’s temperament and restraint, a man capable of overcoming adversity,” continued Scioli. “We hope that on the 23rd he will be in Argentina because we have a great agreement with Brazil, which we have been working with him and his integration team in the different areas of government, which will give great impetus to Argentina.”

With Lula’s presence at the CELAC summit, the issue of regional integration should be treated with emphasis, according to the Argentine Minister of Foreign Affairs Santiago Cafiero. “It’s not just about economic or financial integration, but about strengthening the democratic institutions of each country,” the chancellor told El Destape radio.

Lula is seen as a regional leader

In the neighboring country, there is a high expectation that Lula will resume the leadership position in the region when it comes to integration, both by the current government of the Frente de Todos and by internationalist social organizations.

“It will be an event for Brazil to be part of CELAC again, and for it to be able to make it more dynamic and oxygenate”, says Szalkowicz, who says he hopes that Lula will point to an unofficial agenda to dialogue with the social and union movements in Argentina These bridges are a fundamental part, according to the journalist, of facing the onslaught of the extreme right in Latin America and the Caribbean.

“What happened in Brazil was an explicit demonstration of the strategy of the right, from the coup in Honduras, in Paraguay, including the parliamentary coup in Brazil in 2016, the coup in Bolivia, in 2019, the attempted assassination and political ban against Cristina Kirchner and the persecution of Pedro Castillo in Peru. These are not isolated situations. When they don’t win at the polls, the right has no problem trampling democracy.”

Activist Beverly Keene, from the organization Diálogos 2000, was present at the mobilization in defense of democracy in Buenos Aires, in front of the Brazilian embassy on Monday (9). In dialogue with the Brazil in facthighlighted that, even with the limitations of the context, Lula’s government brings “winds of integration and brotherhood that Latin America and the Caribbean need”, in a context of recently shaken democratic processes in different countries.

“It will be a difficult year for the entire region. The democracy we built in the post-dictatorship years is very fragile. Inequality and the lack of basic tools for the lives of the great majorities means that people do not feel represented or included in it “, it says. “At the CELAC presidential meeting, the situation should be discussed, for example, in Peru, where the people occupy the streets to defend their right to decide their government, and in Haiti, also currently mobilized for its sovereignty and to define its own form of government and representatives.”

:: “Acts were against the Republic and not against Lula or the PT”, says historian ::

In the case of Argentina, the impact of the news about the attack in Brasilia echoed the recent national anti-democratic attacks, having as a trigger the assassination attempt on vice-president Cristina Kirchner, in September of last year. “Before the attack on the vice president, there were several episodes of groups that expressed themselves violently. There is something that is not taken seriously enough, there is not enough containment of action against these groups”, says Amílcar Salas Oroño, doctor of sciences of the Celag, referring to the asymmetry between the action of the authorities in the face of the mobilizations that generated disturbances and called for a coup d’état from the beginning.

“Situations like this make explicit a current concern in Latin America about the role not only of the military, but that of the police. In Argentina, there was a police mobilization during the pandemic, and then a conflict arises that should be prioritized”, points out Oroño.