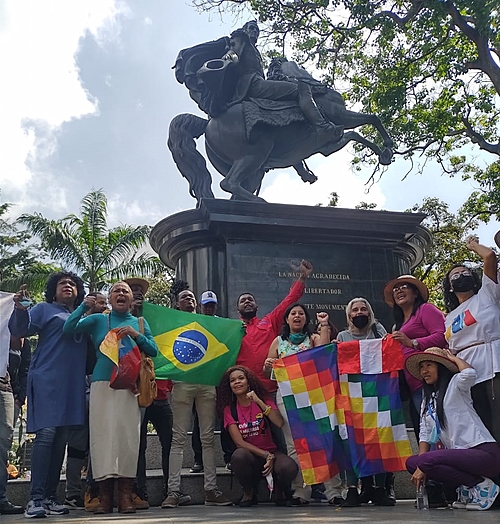 Venezuelan and Brazilian popular movements took to the streets of Caracas, capital of Venezuela, this Wednesday (11) to protest against the invasion of the three Powers carried out last Sunday by Bolsonarists.

The rally took place in Plaza Bolívar and brought together different movements, such as the Apolonio de Carvalho Brigade of the Landless Rural Workers Movement (MST), the Comunera Union, the Francisco de Miranda Front and the Simón Bolívar Institute.

During the act, the organizations condemned the terrorist acts carried out by supporters of former President Jair Bolsonaro (PL) in Brasília and asked that those involved be punished.

To Brazil in Factthe coordinator of the MST brigade in Venezuela, Simone Magalhães, stated that the act aimed to bring together movements from both countries to demand that the material and intellectual authors of the coup acts be identified and held accountable.

“The movements are here today to ask that there be no amnesty for those who attacked Brazilian democracy,” he said.

In addition, the activist highlighted the importance of uniting Venezuelan and Brazilian organizations at this time when the countries must resume diplomatic relations.

“Unfortunately, institutional relations between our countries have been broken in recent years, but now we are going to rebuild this relationship of solidarity that remains, which is alive and which will be respected,” he said.

::In a symbolic act, popular movements hand over the embassy in Brasilia to the Venezuelan delegation::

Activists also expressed support for President Lula’s government and expressed solidarity between the two countries. For Carmen Navas, director of the Simón Bolívar institute, Venezuela has already experienced episodes similar to what happened in Brazil.

“We are here today to show once again that Caracas continues to be a rallying point for the peoples of the world, a center of solidarity and friendship. The Venezuelan people have already experienced what Brazil is experiencing and now we see the opportunity to mobilize and defeat the coup attempt in Brazil”, he said.

In recent days, Venezuela’s Executive and Legislative powers have also condemned the terrorist acts that took place in Brasilia on Sunday.

In a meeting with deputies held this Monday (09), President Nicolás Maduro expressed support for Lula’s government and said that the invasion of public buildings in Brasília was an attack by the right that does not recognize the electoral defeat.

::Lula’s chancellor confirms resumption of relations with Venezuela and talks about “rebuilding bridges”::

“We send all our support to President Lula and to Brazilian democracy. We repudiate the attacks on public institutions by these neo-Nazi and neo-fascist groups of Bolsonarism”, he said.

The President of the Venezuelan Parliament, Jorge Rodríguez, also condemned the terrorist acts of the Brazilian extreme right and said that “when the fascist right loses elections, it resorts to coups d’état, violence and attacks on the constitutional order”.