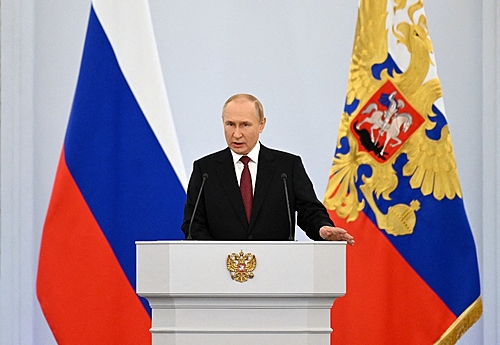 Russian troops received instructions on a ceasefire ordered by Russian President Vladimir Putin along the entire line of contact in Ukraine from 12:00 (Moscow time) on January 6. The information was released by the Ministry of Defense of Russia.

“According to the instructions of the President of Russia, the Minister of Defense instructed the troops to introduce a ceasefire regime for 36 hours, from 12:00 on January 6 to 24:00 on January 7, along the entire line of contact between the parties in Ukraine,” the statement reads.

Putin asked Kiev to also temporarily cease military activities. “Based on the fact that a large number of citizens professing Orthodoxy live in the areas of hostility, we call on the Ukrainian side to declare a ceasefire and give them the opportunity to attend church services on Christmas Eve, as well as on day of the birth of Christ”, says the order of the Russian president.

:: Visit to the USA ensures “Hollywoodian” end of the year for Zelensky ::

The ceasefire declaration responds to the request of the head of the Russian Orthodox Church, Patriarch Kirill, who, on 5 January, called “all parties involved in the destructive conflict” to a ceasefire and declare a truce from 12:00 on 6 January at 24:00 on January 7 so that Orthodox believers can attend Christmas services.

Earlier, in mid-December, Kremlin spokesman Dmitry Peskov said that the issue of a New Year or Christmas truce with Ukraine was not being discussed.

In the office of the President of Ukraine, Patriarch Kirill’s appeal was called “a cynical trap and a propaganda element.” Adviser to Zelensky’s chief of staff, Mikhail Podolyak, said Ukraine would not accept Putin’s proposal.

“First of all, Ukraine does not attack foreign territory and does not kill civilians, as the Russian Federation does. Ukraine only destroys members of the occupying army on its territory. Let them keep the hypocrisy to themselves,” he declared.

Podolyak further stated that the Russian Orthodox Church “is not an authority for global Orthodoxy and acts only as a war propagandist”. According to him, the Russian institution “called for the genocide of Ukrainians, encouraged massacres and insisted on an even greater militarization of Russia”.

“Therefore, the Russian Orthodox Church’s statement on the ‘Christmas truce’ is a cynical trap and a propaganda element,” Mikhail Podolyak wrote in a Twitter post.

:: In a technological dispute with the US, China prohibits the export of processors to Russia ::

This is the first declaration of a ceasefire along the entire frontline since the war broke out in Ukraine on February 24. It remains to be seen whether Moscow’s cessation of hostilities will be enforced in the event that Kiev does not respect the ceasefire.

Another factor that is not clear is whether the Russian paramilitary organization, called “Wagner’s Battalion”, which has also operated in Ukraine, will comply with Putin’s decree. The Russian president’s ceasefire order was addressed to the Ministry of Defense, and the Wagner group is not subordinate to the portfolio.