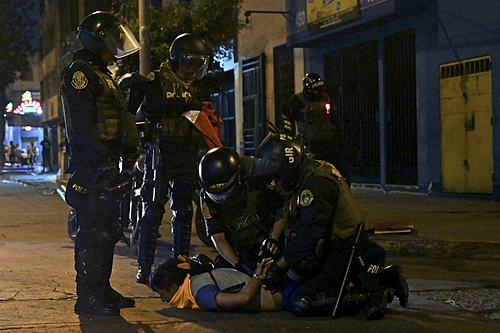 The large demonstration held by Peruvian social organizations this Thursday (19/01), calling for the resignation of President Dina Boluarte and the holding of new elections in the country, aroused the solidarity of various movements around the world, especially in Latin America.

Among the groups that have expressed their support for the Peruvian cause is the Pañuelos Rojos movement, from Cuba, which released a statement this Friday (01/20) declaring that “revolutionaries in Latin America and the rest of the world have a moral obligation to show solidarity with the Peruvian people and contribute to making visible the struggle that is being lived today in the land of Mariátegui and Túpac Amaru”.

Also taking a position on the situation in Peru was the Argentinean social activist Juan Grabois, spokesman for the Confederation of Workers of the Popular Economy in his country and a figure known for his proximity to Pope Francis – it was he who handed Lula a blessed rosary by the pontiff when the PT leader was imprisoned in Curitiba.

“All strength to the Peruvian people in their just struggle for dignity and total rejection of the repressive government. Soon we will be accompanying them in a new Mission of Solidarity and Human Rights”, said the Argentine social leader.

In Chile, the national vice-president of the Teachers’ Association, Paulina Cartagena, published an appeal on her Twitter account asking for “an end to repression in the neighboring country”. The photo that illustrates the message shows militants from the association with a banner saying “The Peruvian people do not surrender! Stop the repression!”

Mexican Tomás Pliego, founder and militant of the Morena party, the same as President Andrés Manuel López Obrador, said that “the coup right is shaking. Today, the people of Peru are preparing to take back the reins of their destiny. From every corner of this sister country, thousands of women and men will try to take Lima peacefully”.

In the rest of the world there were also expressions of support. The US movement Black Alliance for Peace denounced that the Peruvian government increased repression against demonstrators, mostly indigenous, “after blaming them for a fire in downtown Lima.”

For its part, the Catalan organization of Entrepueblos Entrepobles Entrepobos Herriarte published that “in Plaza Sant Jaume in Barcelona, ​​we accompanied our Peruvian sisters in their protest against repression in Peru and in memory of all those wounded and murdered”.