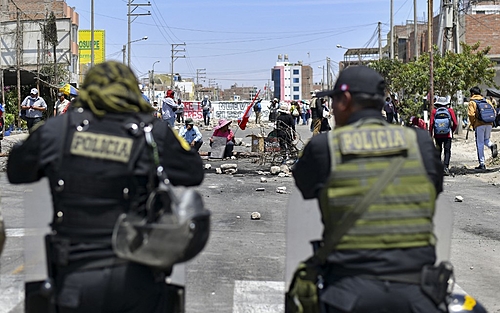 The National Prosecutor of Peru began this Wednesday (11/01) the opening of an investigation against President Dina Boluarte and the head of the Council of Ministers, Alberto Otárola, for their possible responsibility for the deaths of 44 civilians and a policeman that occurred during the protests held in the country since December 10, 2022, a situation that could characterize the crime of “genocide”, according to the Peruvian judicial authorities.

The demonstrations that demand the holding of new elections in the country – as a way of resolving the political crisis that began with the removal of former President Pedro Castillo, on December 7th – have been marked by very strong repression by the Peruvian National Police, the at the behest of President Boluarte, who also decreed a state of emergency across the country and imposed a curfew in some cities where greater police violence against demonstrators was recorded.

According to Peru’s National Human Rights Coordinator (CNDDHH), repression of protests has already resulted in 44 civilian deaths. For its part, the National Police reported the death of a soldier as a result of the actions of the demonstrators. The acts to be investigated took place in the provinces of Apurímac, Arequipa, Ayacucho, Junín, La Libertad and Puno.

The most serious case happened this Monday (01/09), in the city of Juliaca, in the south of Peru, where a repressive action by the police resulted in 17 fatalities. It was also in this episode that a police death was registered during the days of protest.

According to the Peruvian daily La República, the person in charge of the investigation will be prosecutor Patricia Benavides, the same one who already leads the case that investigates former president Castillo for the alleged crime of attacking institutions and democracy – on December 7, before After being deposed, he tried to launch a measure to dissolve the National Congress and install an exceptional government, but this was not accepted by the other State bodies.

It is worth emphasizing that the demonstrations demand that new elections be held in the country, despite the fact that the Boluarte government presented a bill to that effect, which was not well accepted by public opinion.

The president’s proposal foresees that the general elections [para presidente e todo o Congresso unicameral peruano] scheduled for April 2026 are brought forward by two years, to April 2024. However, the social organizations gathered at the recent protests defend holding the election in the first half of 2023.