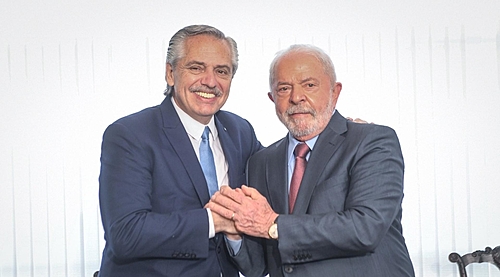 Inaugurating his international agenda, President Luiz Inácio Lula da Silva (PT) leaves on Sunday (22) for Buenos Aires. A bilateral meeting is planned with the president of Argentina, Alberto Fernández, on Monday (23), participation in the Summit of the Community of Latin American and Caribbean States (CELAC) on Tuesday (24) and another bilateral meeting with the President of Uruguay, Luis Alberto Lacalle Pou, on Wednesday (25).

The Argentine president stated in his social networks which will sign an “energy cooperation” agreement with Brazil. The Ministry of Foreign Affairs of Brazil indicated that agreements in the energy area are a possibility, with special emphasis on the Néstor Kirchner gas pipeline.

There is a possibility, therefore, that Lula and Alberto will sign a BNDES loan for the expansion of the gas pipeline. The Brazilian loan was disclosed by the Argentine Minister of Energy, Flavia Royón, in December, but was denied by the Brazilian public bank. With Lula taking office, however, the US$ 689 million loan could move forward.

Also on Monday, Lula and Alberto will participate in a meeting with businessmen from both countries.

On the international tour, Lula should be accompanied by ministers Fernando Haddad (Finance), Mauro Vieira (Itamaraty), Alexandre Silveira (Mines and Energy), Nísia Trindade (Health) and Paulo Pimenta (Secom). The first lady Rosângela da Silva, Janja, is also part of the entourage and will have an agenda with the PT Nucleus in Argentina.

On Tuesday, Lula will participate in the CELAC Summit of Heads of State. During the government of Jair Bolsonaro (PT), Brazil left the regional cooperation body, so Brazil did not participate in the last meeting of the group, held in Mexico in 2021. Bolsonaro’s decision was reversed by the PT government and Brazil returned to the block.

There is an expectation of a joint declaration by the 33 member countries of CELAC, in addition to 12 thematic declarations that may underline regional cooperation.

Venezuela is part of CELAC and Lula may have a bilateral meeting with the Venezuelan president, Nicolás Maduro, in Buenos Aires. Brazil and Venezuela resumed diplomatic relations, which were shaken during the Bolsonaro administration. The meeting between the presidents, however, was not confirmed by the Itamaraty.

On Wednesday, Lula will visit the capital of Uruguay, Montevideo, and will have an agenda with President Lacalle Pou. Uruguayans are having friction with their partners in the Common Market of the South (Mercosur) because they individually seek to sign a free trade agreement with China, while the bloc’s statute determines that initiatives in this sense must be taken jointly. The impasse was the subject of discussion at the last Mercosur summit.