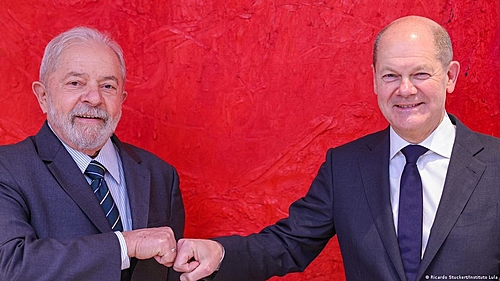 The information was confirmed this Friday (01/20) by the German ambassador to Brazil, Heiko Thoms, in a post on Twitter. The date had already been anticipated by Lula, but, until then, without confirmation by German diplomatic sources.

The Chancellor of Germany has just confirmed his visit to Brazil on January 30th! He and the delegation of representatives from the German economic sector will meet with President Lula and other government representatives. Sign of strengthening cooperation between 🇧🇷 and 🇩🇪! pic.twitter.com/fBt0RZep9r

For Thoms, Scholz’s visit to Brazil, the second by a German official in less than a month, is a “sign of strengthening cooperation” between the two nations. On January 1, the German president, Frank-Walter Steinmeier, was inaugurated by Lula.

At the time, speaking to German journalists, including a DW team, Steinmeier said it was “good to know that Brazil is back on the international stage”.

“We need Brazil, we need Brazilian political leadership, for the country to play its role. And not only in the economy, but also in global climate protection”, declared the German head of state. The day before the inauguration, Lula and Steinmeier had a friendly bilateral meeting.

Scholz will travel to South America in the company of ministers and representatives of large German companies. The entourage will also visit Argentina and Chile. The three South American countries currently have left-wing governments, while Scholz’s Social Democratic Party of Germany (SPD) is center-left.

According to the spokesman for the German government, Steffen Hebestrei, the trip reinforces “the importance of the region as a partner of the federal government” in the deepening of political-economic relations and in the fight against climate change.

According to Hebestreit, the German government also sees the three countries “as valued partners in the struggle for a rules-based, multipolar international order”.

Thoms also highlighted that the German Minister of Cooperation, Svenja Schulze, “will also be in Brasilia at the end of the month”: “We are ready to fight together for the protection of the rainforest and for socially fair and inclusive development”, he wrote on Twitter.

After a distancing from Brazil during the government of Jair Bolsonaro, Germany, an important Brazilian trading partner, has expressed interest in a political rapprochement. One of the possibilities is that the European country allocates more financial resources to fund environmental preservation projects and actions, mainly in the Amazon.

At the beginning of January, when Steinmeier was in Brazil, Germany announced the release of 35 million euros destined for the Amazon Fund, as compensation for the reduction of deforestation in the Amazon biome during 2017, still under the management of Michel Temer.

Created in 2008, the fund receives donations from international institutions and governments to finance actions to prevent and combat deforestation in the Legal Amazon. Resources are used to finance projects to reduce deforestation and monitor the biome.

Bolsonaro carried out several verbal attacks on the German government, especially when Berlin demanded more environmental protection in Brazil. The Brazilian government also promoted unilateral changes in the management of the Amazon Fund, which has resources from Germany and Norway, provoking criticism from both countries and paralyzing the program. Faced with the dismantling of environmental policies in Brazil, Berlin also froze the sending of resources for environmental programs to the South American country during the Bolsonaro era.

In early November, the Federal Supreme Court (STF) ordered the Brazilian government to reactivate the fund within 60 days. The measure was fulfilled in the current administration. On his first day at the helm of the Executive Branch, Lula signed a decree authorizing the National Bank for Economic and Social Development (BNDES) to once again raise financial donations for the Amazon Fund.

In addition to the environmental area, Lula and Scholz should also discuss ways to expand bilateral trade relations and debate the growth of the extreme right in several countries.

One day after the invasion of the headquarters of the Three Powers by radical Bolsonarists, Scholz used Twitter to condemn the coup acts and the depredation of the Planalto Palace, the National Congress and the Federal Supreme Court (STF) building.

“Terrible images reach us from Brazil. Violent attacks against democratic institutions are an attack on democracy that cannot be tolerated. We are deeply in solidarity with President Lula and the Brazilian people,” Scholz wrote on Twitter.

Over the past four years, Brazil and Germany have drifted apart. Neither Scholz nor his predecessor, Angela Merkel (centre-right, in office until December 2021) visited Brazil while Bolsonaro occupied the Planalto. The Brazilian was also not invited to state visits to the European country.

In 2019, then Federal Chancellor Angela Merkel said she viewed the situation in Brazil under Bolsonaro with “great concern”. In 2020, the German government even admitted that cooperation with the Brazilian federal government in areas such as environmental policy and assistance to indigenous peoples was becoming increasingly difficult.

Although the clashes between the two countries were not as explicit as those faced by France with Bolsonaro, the SPD, which participated in Merkel’s coalition and currently leads the German government, did not hide its preference for Lula during the election campaign.

In November 2021, Scholz even met with the PT in Berlin after the result of the last German election, when he was still negotiating the formation of the current government. Several figures from the SPD also expressed their solidarity with Lula while the PT member was in prison.