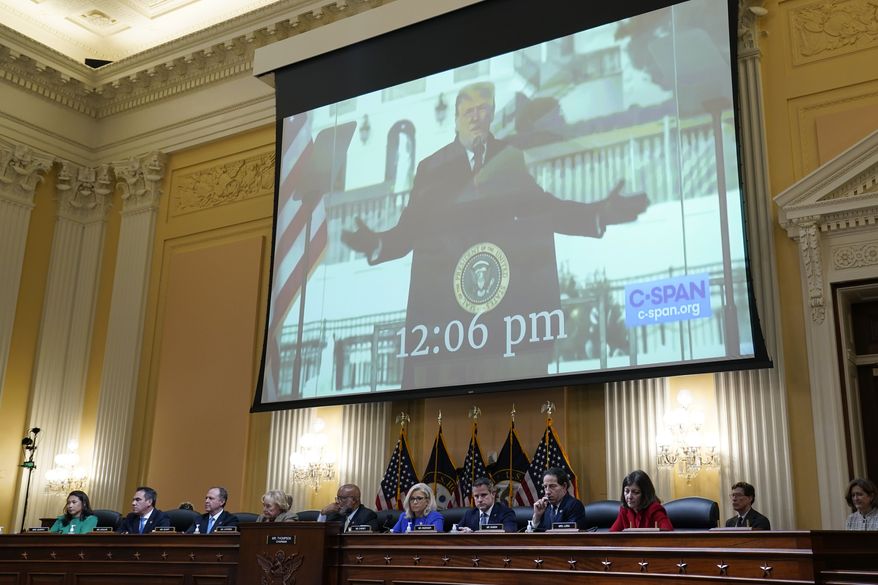 A video of former President Donald Trump at a rally near the White House on Jan. 6 is shown to members of the House of Representatives committee, which unveils the findings after the year-and-a-half investigation, on Capitol Hill in Washington.

After 18 months, more than 1,200 interviews, and 10 public hearings that featured testimony from 70 witnesses, the US House Special Committee to Investigate the January 6 Attack released its final, 845-page report last Thursday ( 22). The report recommended that the Justice Department prosecute former President Donald Trump on four criminal counts, including conspiracy and incitement to insurrection.

It also contained a number of legislative recommendations, including reform of the electoral vote counting process in presidential elections. The committee also recommended that Congress bar Trump and other officials involved in the insurgency from running for office again.

The committee’s recommendation to prosecute a former president was unprecedented. But his investigation of the events of January 6, 2021 fell squarely into the power of Congress and added a new chapter to a centuries-old history of congressional investigations into scandals and government failures.

Of the 11 separate recommendations the Jan. 6 committee offered in its final report, one was a legal recommendation focused on accountability, nine proposed new policies and actions, and one proposed greater oversight within Congress itself.

Federal prosecutors generally conduct their own parallel investigations during the same time period as Congressional inquiries, but they take Congressional evidence and referrals seriously. The committee’s vote from January 6 to December 19, 2022 was the first time Congress had nominated a former president for criminal prosecution.

In the 1970s, the Congressional investigation into the Nixon administration’s cover-up of the Watergate break-in led to the conviction of three Nixon aides for obstruction of justice. In the 1980s, the Senate’s Iran-Contra investigation, along with the Tower Commission’s independent report, into secret and illegal arms sales to Iran by the Reagan administration led to the conviction of three Reagan administration advisers on charges ranging from conspiracy to obstruction of Congress.