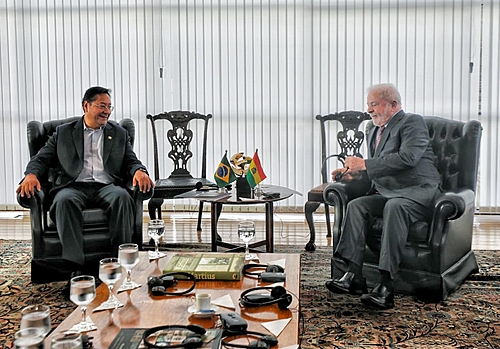 With the beginning of Luiz Inácio Lula da Silva’s government, Brazil and Bolivia can cooperate to advance investigations into the coup d’état, promoted by Bolivian elites and military commands, in November 2019. President Luis Arce’s first meeting with Lula, last Monday (2), set the tone for this alliance.

“To comrade Lula, we want to show all the hypotheses that we raised and that we have been documenting during all this time. We hope that Brazil, with Lula, can collaborate more than the previous government. [do Brasil] to confirm our suspicions. Mainly that the coup d’état involved many more actors and was an illegally devised plan”, explained Arce, in an interview with the newspaper Folha de São Paulo.

In November 2019, President Evo Morales and his deputy, Álvaro García Linera, were forced to resign as head of the National Police and Armed Forces, after winning elections for a fourth term.

The economic elites of Bolivia’s eastern region — home to agribusiness, mining and most of the country’s white population — supported paramilitary groups to generate chaos, attacking the homes of ministers and their families.

Under death threats, Morales and García Linera received political asylum in Mexico, while in La Paz, on November 12, 2019, the then senator for Beni state, Jeanine Áñez, proclaimed herself president of Bolivia

Learn more: Brief reflection on Bolivia since the coup d’état of November 10, 2019

Federation of Women, the so-called Bartolinas, also joined the March for Democracy in Bolivia in 2019 / MAS-IPSP

Unions, popular and indigenous movements maintained protests during almost a year of Áñez’s interim administration, condemning the coup d’état and demanding the calling of general elections. It was through the ballot box that the Movement to Socialism (MAS-IPSP) returned to power with the election of Luis Arce, former Minister of Economy under Evo, in November 2020.

With Arce’s victory, several ministers of the coup administration left Bolivia for fear of punishment. At the time, the Bolivian authorities denounced that two of them had fled through Brazil: the former Minister of Defense, Luis Fernando López – who remains at large – and the former government minister Arturo Murillo, who ended up being arrested in the United States.

As early as 2021, it would have been Jeanine Áñez herself who planned to flee to Brazil, but ended up being surprised by the authorities. Áñez would travel on a private jet, leaving the city of Trinidad, Beni, towards Mato Grosso do Sul. The plan would have received support from two other protagonists of the coup: Carlos Mesa and Luis Fernando Camacho.

The former senator would have been warned by the Beni state attorney, Marco Cossío, that she would be arrested on March 17, 2021 for her role in the coup, which made the police advance the preventive arrest operation to the 15th of March. Cossio resigned on March 19, citing health problems. Áñez has remained in prison ever since, sentenced to ten years in prison for declaring herself president without any legal basis.

Investigations continued to advance and the last figure detained by the case Coup d’état I was Luis Fernando Camacho, current governor of the province of Santa Cruz. Justice decreed preventive detention for 4 months for Camacho, on December 30, 2022, considering him one of the perpetrators of the coup d’état.

“There was more than moral support for the coup d’état”, analyzes the Bolivian political scientist, Yecid Velasco. In an interview with Brazil in Fact, he claims that it is already known that Bolsonaro would also have offered asylum to Camacho. “We want to know what is the status of the ‘refugee’ ministers in Brazil and we hope that they can be deported to respond to Bolivian justice”, he defends. 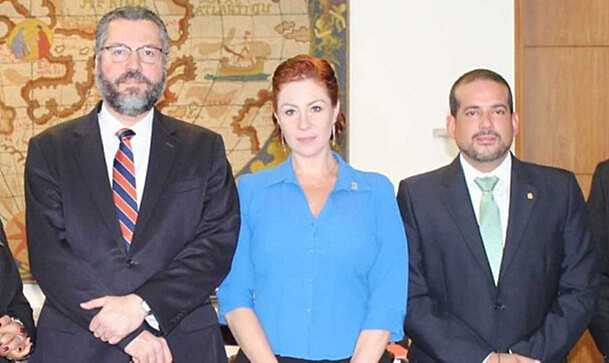 In 2019, Camacho, an extreme right-wing politician, was at Áñez’s side during his self-proclamation and even performed a live in one of the halls of the Quemado Palace, seat of the Bolivian government, spreading a Bolivian flag on the ground and reading passages from the bible that, according to him, justified the coup action.

On November 13, 2019, the Brazilian government, under the administration of Bolsonaro, was one of the first to congratulate Áñez on the beginning of the “interim administration” in Bolivia. 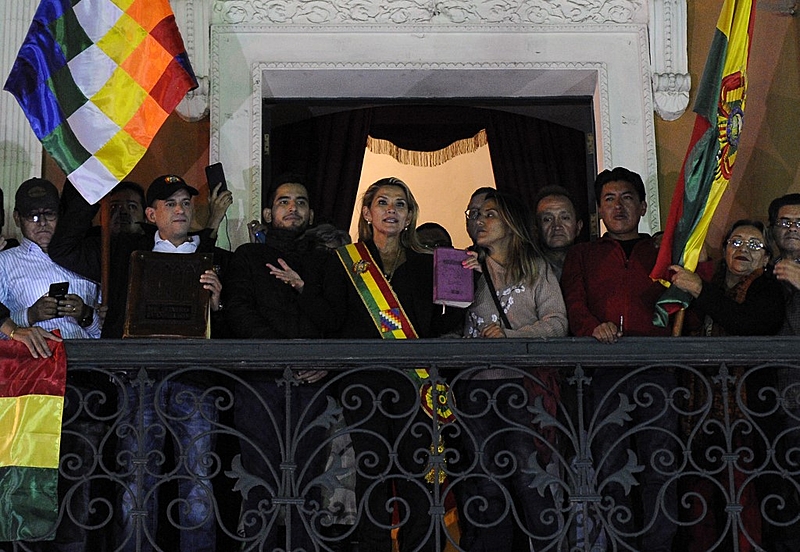 Camacho carrying a bible next to Jeanine Áñez, in the Government Palace of Bolivia, after the self-proclamation and coup d’état in November 2019 / Jorge Bernal /AFP

Investigative reports from the Page 12 portal raised records through the system FlightAware of trips of the presidential plane of the Bolivian Air Force (FAB 001), which show the flight of the aircraft from La Paz to Brasília on November 11, the eve of Áñez’s self-proclamation. In the same month, the aircraft would have traveled to Rio de Janeiro and Manaus.

Both after Camacho’s arrest, and in the case of Áñez, the Bolsonaro family came out in defense of the coup plotters, claiming that they would be victims of a “dictatorship”. The Brazilian government announced that it would offer asylum to the former senator and, on more than one occasion, Jair Bolsonaro also said that if he lost the elections, he would not have the same fate as Áñez.

“Lula’s government will be much more transparent and will not meddle in Brazilian justice, but I believe it can ensure a transparent investigation. We hope that it will provide this information to Bolivia so that the perpetrators of the 2019 coup d’état are held accountable”, says Velasco .

During his election campaign, in October 2022, Bolsonaro received Jeanine Áñez’s daughter in Brasília

Thus, with the beginning of Lula’s third term, Arce asks for cooperation between the authorities to elucidate the details about the relationship between the coup administration in Bolivia and the government of Jair Bolsonaro.

“I have less and less doubt that there is a relationship between the coup d’état in Bolivia and Bolsonaro’s actions. This is evident in several ways. From the charge in the new gas contract we signed, which was totally favorable to the Brazilian government, to his statements of support to Áñez and the report of the planes that suggest a meeting between the two in Brazil during the installation of the operation”, said Arce.

During the Áñez and Bolsonaro administrations, the state-owned companies Petrobrás and YPFB (Yacimientos Petrolíferos Fiscales Bolivianos) signed a contract, providing that YPFB would pay for the transport of gas to Brazil in the Bolivian section of the Gasbol gas pipeline, generating a cost of around US$ 70 million per year.

With the beginning of the Arce administration, and amid disagreements between the two companies, in April 2022, Bolivia reduced 30% of gas supplies to Brazil.

After receiving complaints from Bolivia, Argentina opened investigations against former president Mauricio Macri for his cooperation with actions promoted by the coup administration of Jeanine Áñez. Justice confirmed that Macri’s management was involved in the coup in Bolivia with the shipment of 70,000 rounds of AT 12/70 ammunition. Ammunition that left Argentine territory was not declared on the cargo manifest, classifying it as a case of smuggling.

Now the expectation is that Brazil will follow the same Argentine path and help Bolivia reveal the truth about the 2019 coup d’état. Argentina did with Mauricio Macri”, comments Velasco.

If Bolivia is interested in revealing the whole truth about the coup d’état, for Brazil, the process of investigating and penalizing the Bolivian coup leaders can represent a procedural example for Brazilian justice. After the decision by the Federal Supreme Court to annul the Operation Lava Jato processes that resulted in the arrest of Lula da Silva and the extinction of the actions of the TRF-4 on the alleged “fiscal pedaling” against Dilma Rousseff, there is even more evidence to defend that in 2016 there was a coup and in 2018 an arbitrary arrest.

“The right never sleeps. We see it now in Bolivia, with the presence of a MEP from the Vox party in the stoppages in the province of Santa Cruz, saying that he is an observer of the open process against Camacho”, says the Bolivian political scientist.

On January 1st, under the cries of “no amnesty”, the public that accompanied Lula’s inauguration at the Esplanada dos Ministérios, made it clear that, like the Bolivians, they demand truth, justice and reparation for the impacts of the last administration’s president.