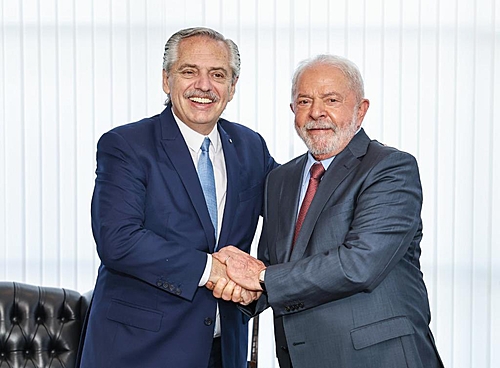 President Luiz Inácio Lula da Silva (PT), already since the announcement of his election, was drawing the route of his first official trip abroad. Initial indications are that Argentina, China and the United States would be Lula’s first destinations in his third term. Now, in the context of the messages of international support he receives, the trip takes on a more concrete form.

In this way, Lula resumes the existing tradition since 1989 of Brazilian presidents traveling first to Buenos Aires – something that was interrupted by the previous administration, when Bolsonaro went to the US during the administration of Donald Trump, in early 2019.

In the Argentine capital, Lula will participate in the summit of the Community of Latin American and Caribbean States (Celac), scheduled to take place on January 23 and 24. The invitation was made shortly after Lula’s victory in the second round, on October 31, when Fernández traveled to Brazil for the first time to congratulate the elected president.

The Minister of Foreign Affairs, Mauro Vieira assured, on the occasion of his first speech, back in January, that Brazil would once again join the regional bloc to strengthen relations with its Latin American neighbors.

“We will have a return to these organizations, but with a new look, because the world has changed. It will be a new look, constructive, with solidarity, always aiming at collaboration between developing countries”, stated Vieira.

Already this Monday (9), Celac published a note in support of President Lula and repudiating the invasion of the headquarters of the Three Powers in Brasília, highlighting the confidence in Brazilian democracy.

“The joint communiqué between the Three Powers demonstrates that the violence of a few cannot be imposed on the peaceful coexistence of the Brazilian people”, says the note. “It is clear that democracy is strengthened with more integration, more development and more institutions”, adds the statement signed by Alberto Fernández.

Likewise, the Argentine president, who also holds the pro-tempore presidency of Mercosur, used the South American integration body to express support for the constitutionally elected government in Brazil.

“Mercosur is a solidary project for peace, union and common development, in which there is no room for violent people who mistreat democracy by installing hate speeches”, he published.

The Argentine Pro Tempore Presidency of MERCOSUR expresses its firm support for @LulaOficial and stands in solidarity with the government and the Brazilian people.

The PPT Argentina energetically rejects the violent actions and the assault on the democratic institutions of Brazil.

A new relationship with the US?

Next, the president must travel to the United States to meet with Joe Biden. Vieira had already discussed the agenda for the visit to the White House in a telephone conversation with the US Secretary of State, Anthony Blinken, at the Tuesday (3).

Already this Monday (9), on the occasion of the coup acts on Sunday (8), Joe Biden reinforced, through a telephone conversation, his support for the Brazilian president-elect, against attacks by the Bolsonarist extreme right. In the joint communiqué of the two foreign ministers, it was recorded that “President Biden invited President Lula to visit Washington in early February for in-depth consultations on a broad common agenda.” Lula officially accepted the invitation.

Finally, in March, Lula should travel to China, Brazil’s biggest trading partner, and, in April, he should meet with the Portuguese president, Marcelo Rebelo in Lisbon, to accompany the delivery of the Camões Prize for Literature to Chico Buarque.

The Prime Minister of Portugal, Antonio Costa, made a point of talking to President Lula da Silva by telephone, last Monday (9), to express his repudiation of the terrorist acts in Brasilia and initiate dialogues for his first meeting, scheduled for the 23rd and 24th of April, in the Portuguese capital.

“I spoke today with President Lula to whom I expressed our solidarity and reiterated the condemnation of the violent and anti-democratic acts that took place yesterday in Brasília”, he said.

I spoke with the President today @LulaOficial to whom I expressed our solidarity and reiterated my condemnation of the violent and anti-democratic acts that took place yesterday in Brasilia. pic.twitter.com/84SWgffzQY